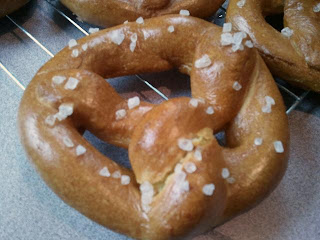 Yes, this is the real deal. The tastiest, gluten-free, grain-free sourdough pretzel you can imagine. The recipe is all ready to go

Against The Grain is applying for this grant, and view it as an opportunity to bring a really cool gluten free product to market. As you may know, we have spent the past five years in business working extremely hard to keep up with the demand for our products. No one is happier than us that our products have been met with such enthusiasm and devotion, but it has been at the expense of innovation. This is an opportunity for us to fast-track a new and incredibly delicious product. Given the participation of the social media company, LivingSocial, we are required to amass 250 votes by June 30, in order to qualify. This is where you come in. Want to help us innovate? Want to have REAL sourdough soft pretzels that are naturally gluten- and grain-free? Soon? Here’s what you do:

4) Type in “against the grain gourmet” in the search, then click on the search button

6) Cast a vote for all your favorite companies.

Pizza Party for the 4th of July: Three Pizzas to Wow The Crowds 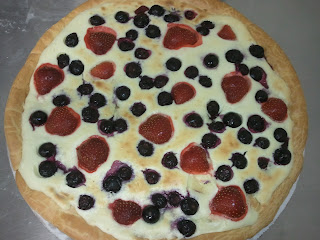 Backyard fireworks launched from a small sandpit my dad would create for the occasion, sparklers, black snakes (the kid-friendly firework kind, not the reptiles,) watermelon seed spitting contests with my siblings, and mounds of barbecued chicken. These are my early memories of the fourth of July. The fourth of July comes just at the time in the summer when everyone needs a fun holiday, an excuse to have a picnic with red and white checkered tablecloths and decorate with red, white, and blue. It is fun to decorate with food, too, but as it turns out, there aren’t too many blue ones—lots of red and white, but blue? None-the-less, we came up with three patriotic pizzas that will leave family and guests smiling. The first recipe idea comes from Alex, who didn’t miss a beat when asked what foods were blue. “Blue cheese!” obviously. 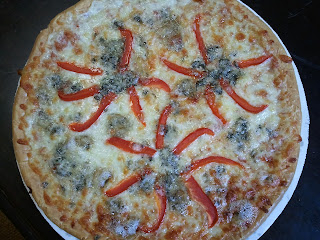 1. Cut the pepper into thin strips and arrange it like fireworks bursts on your pizza. Ours looked like this:
2. Crumble the blue cheese and put little mounds in the middle of the pepper bursts. Sprinkle the rest around the pizza (like random fireworks?)
3. Bake directly on the rack at 375 degrees for approximately 15 minutes.

The idea for the blue potatoes in this recipe came from Jeremy, who is way into organic gardening. Thinly sliced, the potatoes bake until just tender. The aroma is pleasing, the polka-dot effect arresting, and fresh potatoes on pizzas are unusually yummy toppings.

1. Place the sliced blue potatoes and crushed garlic in a bowl, sprinkle with salt, and toss with olive oil. Let the mixture marinate for approximately 30 minutes.
2. Chop the pepper into small pieces.
3. Arrange the potatoes on the top of the pizza and sprinkle with the red pepper. Ours looked like this: 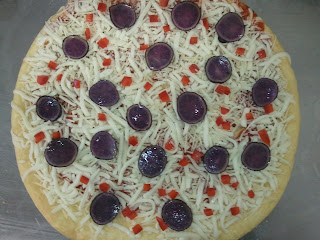 4. Bake directly on the rack at 375 degrees for approximately 15 minutes.

Yes, you read that title right, with cheesecake and pizza in the same sentence. This pizza was inspired by our resident dessert pizza creator, Josh. Since our organic strawberries have just started ripening in our garden, it seemed like a great way to share some of them. Besides, we’ve already shared way too many with the pesky voles who seem to have moved in over night and made a pool table’s worth of holes in our strawberry patch. Just wait until you try this one. While we all thought that one never eats a cheesecake hot, we couldn’t resist and were rewarded with the bursts of hot blueberries and strawberries tucked into a divine cheesecake layer. My test pizza, more like a cheese danish, disappeared in nanoseconds. Who says pizzas are for dinner? This pizza is a dessert you won’t forget... now, I’ve already promised to make two more for the staff for tomorrow.

1. Blend together the cheesecake ingredients with a wisk. Spread the mixture evenly on the pizza shell.
2. Top with a mixture of strawberries (cut-side down) and blueberries.
3. Bake at 375 degrees for 18-20 minutes, just until the cheesecake starts to brown slightly.