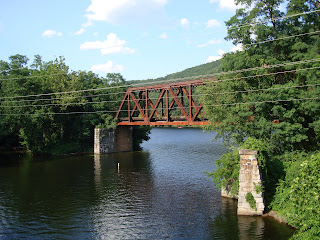 This past weekend, Alex and I decided to go out tandem bike riding. Although Alex will be 21 this month, he has never had the balance to be able to ride a two-wheel bike by himself. But that doesn’t stop him when it comes to tandem bike riding. 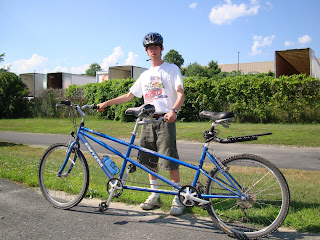 Starting out from Against The Grain's parking lot
He’s a real trooper, and both of us are suckers for what we call “river rides.” Those are looping bike trips that cross over a river, and then cross back at another point. By far, our most ambitious ride has been 70 miles, with two international crossings of the St. Lawrence River into Canada and back. Locally, we have a neat Connecticut River ride that takes us into New Hampshire, across a lower ridge of Mt. Wantastiquet, and back into town. This past weekend, we tried a new one—the West River ride. 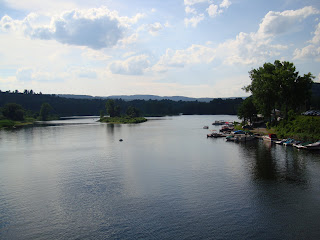 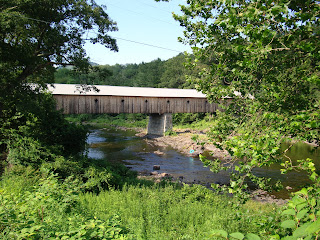 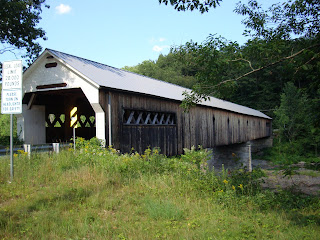 The Dummerston Covered bridge was easily Alex's favorite part of the ride
The challenge in this ride was crossing up between Black Mountain and Prospect Hill on the East West highway in Dummerston, VT. The elevation gain was 400-plus feet over one mile, and it took a lot of team work in the 90 degree heat for us to keep moving forward and up. About 1/4 mile from the top, I had to resort to reminding Alex of the story of The Little Engine That Could. He started pedaling to the cadence of “I think I can, I think I can” and we made it to the top in style.

It occurred to me that our biking, and the teamwork involved, have a lot in common with Against The Grain. My favorite metaphor for starting our business was a trip we made to NYC with the then pre-teen boys for the Five Borough Bike Tour. At my brother’s suggestion, who had done the ride the year before, we didn’t start in Lower Manhattan; rather, we pedaled over from our hotel to join the tour just below Central Park. When we got to Sixth Avenue, there were barricades and people pedaling along the Avenue. We squeezed between two barriers, hopped on our bikes, and joined the crowd…or so we thought.

Within minutes of pedaling, we were startled by the sound of a bull horn announcing the arrival of the fast-moving, lead peloton. With barricades on both sides, it was either pedal as fast as we could and hope they could dodge us or get run over, a situation not at all unlike the current gluten free marketplace. Yep, initially we pedaled leisurely right into the front of the gluten free peloton. As a small, artisan manufacturer, we’ve been pedaling the bike really hard ever since. And there is a lot of creative problem-solving and team work involved in making our products a success. We work in small batches that require close coordination and timing between our bake team members. Baking with farm-fresh ingredients means we also work closely with our suppliers to make sure we have fresh ingredients on hand just when we need them. John,” the egg man” from Maple Meadow Farms, for example, monitors our supply and adjusts his deliveries with a certain degree of wizardry that always works.

Using team work to power a bike to the top of a steep hill feels really good. So does building a business from scratch with highly committed employees and crafting a premium product with team work, ingenuity, and clean ingredients.
Posted by TLC at 6:04 PM

Great story! Thanks for including pictures.