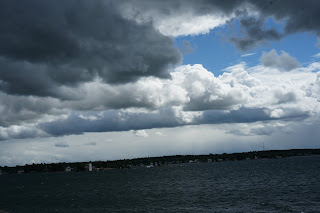 We spent Labor Day on the St. Lawrence River with friends. Since the weather looked iffy from the start, perhaps an indirect effect of Hurricane Earl, we decided to embrace the shift in temperature and plan a Thanksgiving-like Labor Day meal. After all, we still had a wonderful Stonewood Farms antibiotic- and hormone-free Vermont Turkey in our freezer, and Thanksgiving 2010 was just around the corner. We planned a simple meal based around the turkey, stuffed with Rosemary Baguette stuffing… and tomatoes. Lots of tomatoes. Our garden back in Vermont was bursting with tomatoes, as was our friend’s. Thus, tomatoes had to be on the menu in some way as well. 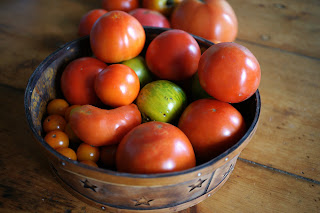 The weather turned out far better than we expected, but it was a weekend of violent fronts moving in across the River, white caps, and some of the most spectacular sunsets. 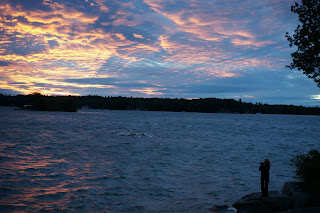 At times, it seemed as though we went through three seasons in an hour. In the end, it was perfect roasted turkey weather, complete with a fire in the woodstove. So, in time for early-bird Thanksgiving planning, here is our recipe for awesome turkey stuffing—guaranteed to please the most gluten-free hostile relatives. 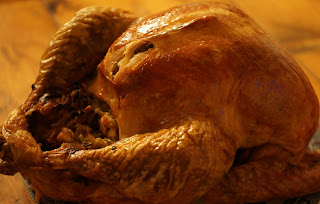 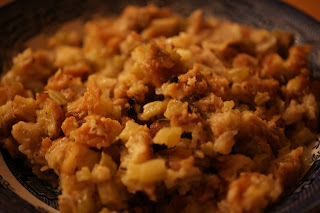 Note: This recipe is based on the 13.5 pound turkey I happened to have. Stuffing amounts needed to be adjusted according to the size of your bird. This amount of stuffing was perfect for a turkey of this size; however, the next time I will double the recipe and bake some more stuffing separately. It disappeared on our table in nanoseconds!.

Directions:
1. Toast rosemary baguette slices for approx 15-20 min @ 250-300, and dice in approx ½ inch cubes.
2. Melt butter in frying pan; add chopped celery, onion, salt, and pepper and sauté for approximately five minutes.
3. Toss butter and vegetable mix with bread crumbs; add raw egg until evenly moistened.
4. Stuff turkey cavity and place in preheated oven (I cook my turkey at 325, but follow directions on turkey packaging.)
5. Bake uncovered for 1 hour. After one hour, cover breast with a small piece of muslin, and baste as needed until done, pouring off juices as necessary. You don’t need to cover the exposed stuffing if you like the surface to be slightly crispy.

Original Rolls or Original Baguettes will work just as well for the stuffing recipe. If you specifically want rosemary stuffing, add a Tbsp of fresh chopped rosemary to your sautéed vegetables. Rosemary rolls may be substituted for rosemary baguettes.
Posted by TLC at 2:50 PM