Halloween at Against The Grain Gourmet 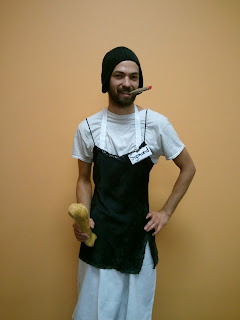 Did you know that your favorite gluten free products are made by the neatest, most caring, and intelligent staff one could assemble? It is absolutely a joy to come into work everyday and bag, bake, or mix alongside such an interesting group of people. Every year at Halloween, we let our silly sides hang out.

The challenge is to come to work in a costume that is still production-floor legal, meaning we have to wear head covering, no jewelry or bangles are allowed, and we still have to wear protective clothing. Well, in truth sometimes some of us have to jettison part of our costumes to work on the production floor all day. This is our third costume Halloween, and it is still as entertaining as ever.
This morning, a cowboy was already on the floor when one guy came in wearing a black satin slip over his apron, with a black skullcap, carrying a fake cigar. Deadpan, he says:
“Guess what I’m sexed, I mean dressed, as?
“I’m a Freudian dick, I mean slip.”

It was only after I got over the shock of his costume and was practically falling on the floor in laughter that I noticed the name-tag affixed to his slip, which said “Sigmund.” And he thought we wouldn’t “get” it when he delivered that monologue? What a hoot! Over the years, we’ve had some pretty funny costumes, including Santa Claus, a pumpkin, a graduate, Michael Jackson, the Witch of the West, a winged monkey, a golfer, a yachty, a surfer dude, and a safari adventurer. No one yet has attempted to be a bagel, a baguette, a roll, or a pizza. I’m sure that day will come, though.
Work is work, but that doesn’t mean that it can’t be fun. Happy Halloween from all the ghouls, goblins, and assorted miscreants from Against The Grain Gourmet! 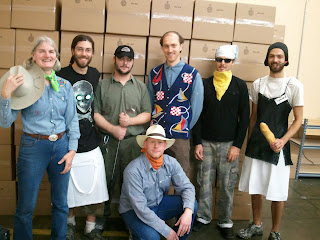 Some of the brave ones at Against The Grain
Posted by TLC at 1:00 PM