The Unintended Consequences of a Gluten Free Diet 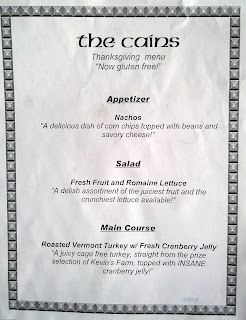 It was almost exactly six years ago that our family of four made the switch to a gluten free diet. For three years Tom’s had a “possibly celiac” diagnosis and had tried to restrict the amount of gluten he ingested. But it wasn’t until our younger son, then 13, was diagnosed with celiac disease, that we made the decision for the whole family to go gluten free. With two of the four of us requiring a gluten free diet, two teenagers, and the risk of contamination, we decided to make our entire household gluten free.

That first Thanksgiving in 2004 was a different one for us. Our younger son wrote up the menu, as he had done every year since he learned to write. The 2004 menu says it all: “Now Gluten Free.” That year, we made a wild-rice and pecan-based stuffing (our menu author didn’t even know what that was!,) since we hadn’t found any gluten free bread we liked. By the next year, we were making stuffing with our Rosemary Baguettes, and what a difference that made. Even our non-gluten free guests always begged for more, and rosemary baguette stuffing has become a tradition. (We also make a tiny slit in the top of each side of the turkey breast and insert a sprig of fresh rosemary. There is nothing like rosemary flavor flowing through with the juices.) 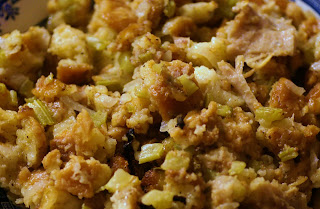 In those six years, some amazing things have happened. We ended up starting Against The Grain Gourmet one year after our son’s diagnosis. And what a ride it has been. With absolutely no experience in the food manufacturing business, I can honestly say that we have built a company that lives up to its name: Against The Grain. Not encumbered by preconceived notions of how to mass produce food at the lowest possible cost, we have created artisan products and sought out the highest quality ingredients. Along the way, we have supported a lot of family farms and independent producers. Since our inception, we’ve been on a mission to make high quality, tasty products that are naturally gluten free.

The other amazing thing that happened is that our older, non-celiac son, who has lived with a life-threatening seizure disorder since 18 months of age, stopped having seizures once on a gluten free diet. He has now been seizure-free for six years. Before going gluten free, he never went for more than six months without having a seizure. I know that critics like to bash Elisabeth Hasselebeck for suggesting that everyone should try a gluten free diet (http://tinyurl.com/33d859c,) but honestly, we never would have figured out how to control our son’s seizure disorder had we not placed him on a gluten free diet.

I get pretty exasperated with those who believe that non-celiacs on a gluten free diet are compromising their nutrition or that it is “bad” for them. Statements like "cutting gluten out can be dangerous " puzzle me. When celiac expert, Dr. Peter Green is asked, "Are there benefits to adopting a gluten free diet?" He answers, "Not that I'm aware of." Tell that to my seizure-free son. Tell that to the 60% of children on the autism spectrum that studies have shown have a "leaky gut."

A gluten free diet is not entirely healthy??  I mean, how hard is it to figure out how to supplement the vitamins, and sprayed on or "fortified" vitamins in many wheat-based products? Fiber concerns? If people are relying on their bread, pasta, and cereal to meet their fiber needs, they don’t have a very balanced diet. One thing that is clear to me is that we know a miniscule amount about the effects of eating highly processed/modified foods on our health. Heck, We don’t even know definitively how our health is related to what we eat. If a gluten free diet makes you feel better or even think you feel better, why not? Your choice is not in any way taking away from the seriousness of the celiac disease that afflicts my husband and son.
Posted by TLC at 9:00 PM

Hi, I was looking up mono calcium phosphate as it is in our Orgran buckwheat pancakes packet....hmm I'm not impressed that they add it. I am impressed with your dedication. Funnily enough, 6 years ago my son Tom was told to follow a celiac diet which I did with him, he lost weight and his asthma went..... he hasn't used vetolin or flixotide since.....which was the driving force to finding a healthy alternative to drugs. He is a strong, healthy teenager now with plenty of energy to play three basketball games every weekend. Getting rid of gluten, sugar and yeast from our diet was the best thing we have ever done.
Cheers
Melbourne Australia