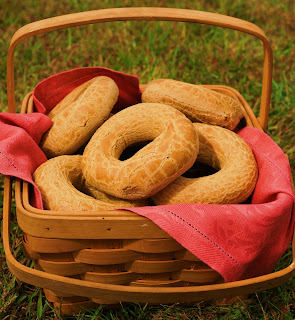 It is trying to snow outside this morning, but it is rapidly turning to rain. It is kind of odd that it is mid-December in Vermont, and the ground here in the southern part of the state is bare. What better thing to do on a damp, rainy day than to bake a traditional favorite that will warm the house with the smells of times past: bread pudding. Bread pudding is an old-fashioned dish that was developed mainly to use up the stale ends of bread, back when bread used to be all-natural and not loaded with anti-molding agents and preservatives.

This bread pudding recipe has a few twists, though. It is gluten free, dairy free, and made from our new gluten and dairy free cinnamon raisin bagels. They’ve been on the market only a few weeks, but boy will you want to seek them out. In our household, where we can choose among all of our bread flavors for breakfast, the cinnamon raisin bagels have risen to the top. For me, a toasted bagel with my homemade rose petal jelly is simply a divine way to begin the day. But I am digressing. For all of you out there who cannot eat dairy, this Cinnamon Raisin Bagel Pudding is the ultimate bread pudding treat.

The following recipe includes an optional ingredient: bourbon. It adds a richness and complexity to the dessert if you want to wow your guests, but it is excellent without it. If you choose to include the bourbon, reduce the coconut milk by ½ C. Move over Paula Deen!

Directions:
1. Preheat oven to 325.
2. Slice bagels into ½ to ¾ inch cubes. Toss with raisins and cinnamon and cover the bottom of a greased 9 x 13 baking dish.
3. Heat coconut milk, water, and sugar in saucepan until it begins to foam.
4. Remove from heat and stir in maple syrup and vanilla.
5. Wisk eggs into mixture, beating constantly until uniformly blended.
6. Pour mixture over bagels and top with toasted coconut (optional)
7. Cover with foil and bake for 45 minutes.
(To toast coconut, spread in large skillet and cook over medium heat, stirring often until coconut is evenly browned.)
Posted by TLC at 12:25 PM