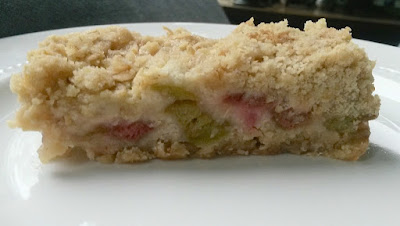 Here in southern Vermont, we thought winter would never end—the last snow went out of our yard on May 2, which was pretty disheartening. But the first green to appear in the garden was rhubarb. Our initial plants, of the green variety, were given to us by a friend three years ago. 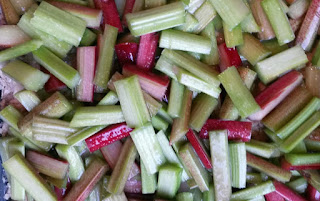 Last summer I bought a few more red ones, so I was eager to see the results. With the first rhubarb cutting, I made rhubarb pickles using a recipe in the March/April 2015 issue of Eating Well Magazine.


They are still doing their pickle thing; the flavor is great but they are not quite as crisp as I had hoped.For my next rhubarb culinary experiment, I hit a home run with these Rhubarb Crisp Bars. Many people add strawberries to their rhubarb, but I prefer the tanginess of pure rhubarb. In these bars, the combination of oats, light buckwheat flour, and brown sugar pairs extremely well with the rhubarb. 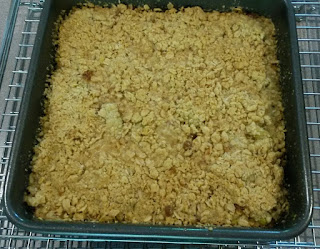 These bars are firm enough to hold, yet crumbly like a fruit crisp. Perfect with tea or served with a side of vanilla ice cream for dessert.


1. Preheat the oven to 350 degrees F. Grease a 8 x 8-inch square pan with butter and line with parchment paper.

2. In a medium bowl, toss the rhubarb, sugar and lemon juice together. Sprinkle with 1 tablespoon of tapioca and toss again. Set aside.

3. In another medium bowl, blend the oats, tapioca, buckwheat, and both sugars. Work in the butter with your fingers until the butter is incorporated and the mixture is crumbly. Pour approximately ½ of the mixture into the prepared pan and press down until evenly packed. Spread the rhubarb mixture over the crust and top with the remaining crumbled flour mixture.

4. Bake in the center of the oven until lightly browned or about 45 minutes. Remove from the oven. Let the bars totally cool in pan before removing and slicing into bars.
Posted by TLC at 2:13 PM