Taking a Day Off for Yourself 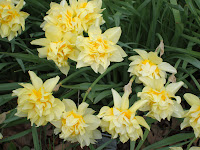 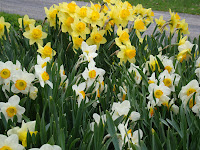 One of my favorite books as a kid was Ferdinand the Bull. Ferdinand was the original “against the grainer.” Rather than fight like all the other young bulls, he was more interested in smelling the flowers. That is what I did the other day. I took Friday off work and drove up to one of my favorite of all places: Thousand Island Park, a Victorian summer cottage community on an island in the St. Lawrence River. It was preseason, so I had the place pretty much to myself…and an explosion of daffodils. Perhaps it was because of the mild winter and the relatively chilly spring, but I have never seen daffodils quite like these.

It was a pretty gray, overcast day when I arrived at the River, and against that backdrop the daffodils practically sang out to me as I passed. It felt really good to get away. Spring on the production floor often can be challenging. Sure, the weather improves and the incredible hues of Vermont spring green beckon us outside. But, the weather also beckons the cows back outside, and the corresponding dietary shift from hay and silage to grass can wreak havoc on the chemistry of milk…and cheese. And since we use milk and cheese in our products, you get the idea. At the River, the worries of the production floor fade away. The only frustration is that the days aren’t longer.

Two days later at the River, the temperature soared into the mid-eighties. Between the temperature and the abundant sun, the daffodils first dulled, and then began shriveling by day’s end. I felt fortunate to have participated in the flowering of spring bulbs in all their glory. As hard as it is when you are running a rapidly expanding business, it is important to take a break from time to time to recharge your batteries and smell the flowers…literally. I’m glad I did.
Posted by TLC at 1:48 PM