Who Eats a Gluten Free Diet? 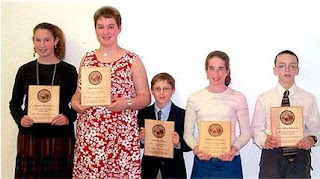 2002 6th and 7th grade Vermont Maple Essay Contest Winners
Can you find the celiac?
The obvious answer to this question is people with celiac disease. In our family of four, it is my husband and my teenage son. Although Tom was first diagnosed with what doctors termed a “bleeding ulcer” at age 15, and had a lifetime of symptoms, it wasn’t until he was 50 that he was finally given his diagnosis. Marty was diagnosed at 13 after he stopped growing. In hindsight, his pediatrician determined that he had fallen off his growth chart between 18 and 20 months of age. In all probability, that is when his celiac disease began. Between contamination issues and teenage sibling rivalry, we decided it would be better for all concerned if our kitchen was gluten free.

And then a funny thing happened (besides starting a gluten free bread company.) Our oldest son, despite being on medication, had suffered from status seizures all his life. One year into the gluten free diet, we realized that his seizures had vanished. Now, four year later, he’s still seizure-free. Recently, genetic testing for celiac disease revealed that he carried the markers, but he’s never tested positive for celiac disease. I, too, realized that I felt much better on a gluten free diet. As a runner, it had become harder and harder for me to run more than several times a week without experiencing significant joint pain. About six months into a gluten free diet, the joint pain that plagued me went away.  For me, eating a gluten free diet seemed to have an anti-inflammatory effect, an effect also reported by many others. Now I can run as much as I like, and my only problem is finding the time to do so!

It turns out that a lot of non-celiacs eat gluten free. In addition to the celiac population, it is thought that up to 10% of the population suffers from some form of gluten intolerance, reports Lu Ann Williams of Innova Market Insight Research. And, according to Cynthia Kupper, executive director of the Gluten Intolerance Group, surveys show that 15 to 25 percent of consumers seek out gluten free products.

Is eating a gluten free diet harmful to your health? I’m not sure why some believe a diet that is appropriate for a celiac is unhealthy for everyone else. Makes you wonder whether the grain folks are getting nervous about their shrinking market. Like celiacs, those that simply eat gluten free can take the necessary supplements (e.g., B-12, calcium, etc.) –we do. Some say a gluten free diet lacks fiber, as if bread, beer, and pasta give a gluten-eater all the fiber they need for digestion. Um, what about vegetables? Don’t people cook vegetables and make salads any more? Eating gluten free also means eating a lot less processed food, being very careful when eating out, and virtually eliminating fast food in your diet. What could be wrong with that? Recently the New York Daily News ran an alarming article with the screaming headline: “Following a Gluten Free Diet Can Be Harmful to Health.” Really? Tell that to my seizure-free son. We never would have made the connection between gluten and his seizures had we not followed that “dangerous diet.”
Posted by TLC at 8:13 PM

Thanks for writing this and sharing your family's story.
I would like you to read mine as well as so many others that people have shared with me.
http://wp.me/PrAld-1e

Take care of you,
Aunt Jayne

Your story is interesting, indeed. Last year, we personally presented our products to 21,000 celiacs at GF fairs, walks, conferences, etc. I can't tell you how many people told stories similar to ours. I am surprised that so little medical, scientific, and media attention is given to the neurological impact of celiac disease. Thanks for commenting and sharing your's and other's stories.

I have psoriasis, which is a disease of the immune system. When I maintain a gluten-free diet, it clears up. I know a few people who have had this experience.

BTW -- I love your products!