Journey into the World of Gluten-Eaters, Episode Two: Strolling of the Heifers 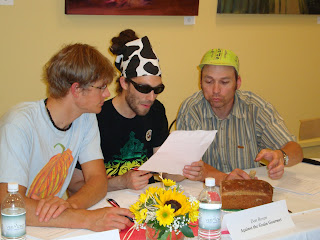 The celebrity judge from Against The Grain rates a loaf
In a previous post, I commented that it is a good thing to sample our gluten free bread products to gluten-eaters from time to time. Friday night, we were one of the corporate sponsors of the most gluten-eater event of all: a bread baking contest. King Arthur, another fine Vermont company, was one of the sponsors as well. Even though they now have a line of gluten free mixes, this was a major gluten event. Why, you might ask, would a gluten free bread company sponsor an event like this? It was a benefit for Strolling of the Heifers, a local event that raises money and awareness for Vermont farming, educates youth, and works to preserve the livelihoods of farming families. And, we’re very much about supporting local producers. The bread baking contest was only one event of the weekend, which includes, a parade with 100 flowered heifers marching up Main Street, along with every imaginable parade entry. The event is so popular that over the weekend, the population of Brattleboro swells three to four times. Fun is had by all. 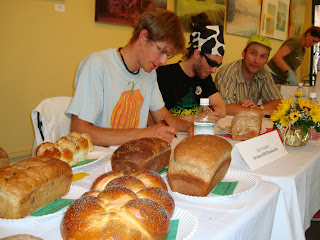 Entries await judging
As a sponsor of the event, we were asked if we wanted to be a judge of the bread-baking contest. One of our bakers whose wife is gluten free, but he isn’t, agreed. He also had been a artisan bread baker in Massachusetts before joining Against The Grain, so he was a perfect candidate. When Dan found out that he was billed as a “celebrity” judge, that added even more seriousness to his purpose. He joked that he would find himself saying, “Well, I’m going to ‘go against the grain’ on this one.” But, he reported that all three judges totally agreed on the top entry, as well as second and third place. Lest we think that only gluten free eaters complain about bread, he reported that they had to sample a number of loaves that were awful. And, no, there were not any gluten free entries. 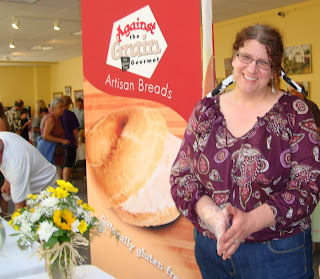 Ruth greets tasters, 1000+ of them
A number of local vendors had tables at the bread baking contest event, including Grafton Cheese, Cabot Cheese, King Arthur, and us. King Arthur even offered samples of gluten free brownies made from their new gluten free brownie mix. Alas, I didn’t get to taste them since we were trapped behind our table and a swell of 1,000+ tasters. It was pretty amazing to me how many townspeople had never heard of us and were thrilled to try our bread, gluten free or not. We also met gluten free people from distant places like Florida, Ohio, Michigan, and across the border in Massachusetts and New Hampshire, who discovered our product that night and vowed to become customers. One of my favorite visitors was a man who stopped by, tasted a piece of sesame bagel, stopped in his tracks, tasted another, then another, and loudly proclaimed, “I don’t care if this bagel is gluten free or not; it is the BEST bagel I’ve ever eaten in my life!” Like I said before, it can be very affirming to journey into the world of gluten eaters—our products are all about great tasting products…products that just happen to be naturally gluten free.
Posted by TLC at 9:56 AM