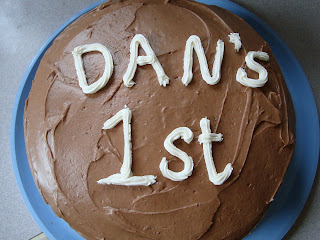 This morning, I woke up after being away for the Memorial Day holiday and panicked. I realized that it was June 1, and it was the first anniversary of Dan’s hire. We have a small, close-knit group of people working at Against The Grain. I’m not quite sure how it happens, but it doesn’t take long for traditions to become established. And one tradition we observe is employee anniversaries. I make a gluten-free, casein-free cake for every employee’s anniversary, and we all sit around for a few moments and celebrate. And, of course, I never use a mix because I never bake with xanthan or guar gum (I can always taste the gumminess and aftertaste so avoidance has become my obsession. As an aside, other people have written us and said the same thing, so I know I’m not all alone in my gum obsession.) However, there are a number of good gluten free cake mixes out there on the market if you’re not an xanthan or guar gum phobe.

Luckily, I had all the necessary ingredients on hand, so I leaped out of bed and went to work. As I write this blog, I am pacing the floor waiting for the cake to cool in the unusually warm Vermont weather for June. Long ago, I learned the perils of trying to ice a not totally cool cake in hot weather. It just oozes and oozes and makes a total mess! Besides that, as the recipe-developer and inventor of our bread baking process, I feel a certain degree of pressure to make the cake look (and of course taste) respectable. I must admit, I am by far not a graduate of Wilton Decorating classes. The last time I decorated a cake for Sean’s 2nd anniversary, I wrote “Sean reaches the terrible two’s” on the top in icing script. “Huh?” One of my colleagues said, starting to read the message, “Scan nachos? Huh??” We got a good laugh out of it, but I’m still defensive of my primitive decorating skills.

Insisting on baking cakes from scratch certainly has its liabilities, but baking from scratch with simple, fresh ingredients it is the philosophy on which our company was founded. I’m proud to say that I have made every one of my kids’ birthday cakes from scratch, and my oldest one will turn 21 this summer! Only once have I had to resort to a non home-made option. That was last year on my mom’s 88th birthday. She had requested a turkey for her birthday (which I had stuffed with this, moist, delicious stuffing made from our Rosemary Baguettes.) It was only after the turkey was in the oven that I realized that I hadn’t yet baked the cake. In a pinch, I bought some gluten free brownies and some chocolate mint ice cream. Then, using the softened ice cream, I built a cake using the brownies like bricks and the ice cream like mortar. Then I “iced” the entire cake with softened ice cream. After an hour or so in the freezer, I had a passable gluten free birthday cake. Of course, it wasn’t guiltless since I hadn’t baked it from scratch…

So far, our company is small enough that a nine-inch layer cake gives everyone a taste. I’m not sure what will happen some day when anniversaries occur weekly, and it takes far more than a nine-inch cake to celebrate. I’ll figure it out, though, because traditions are part of what makes a company’s culture. Time to ice the cake!
Posted by TLC at 9:12 PM

Love your blog! I don't know how you do it with all you do in a day...plus baking a cake from scratch! You are to smart! Now, since you're so smart, how 'bout getting your stuff down here in Houston?? I'm having MAJOR withdrawals from samples (4 years or so ago?) ! : ) kathi

Kathi,
We are getting closer. We hope to be west of the Rockies by year-end. Go hound your local Whole Foods (frozen department.) A customer did that in Florida--called every day for three weeks, and they caved in. Now we are in all the Florida Whole Foods. As for the time to bake a cake, I make the time since I love the crew we have working for us, and they make it all worthwhile.

YAY! Will do! I can hound with the best of them! Keep your eyes open!
You da best! k