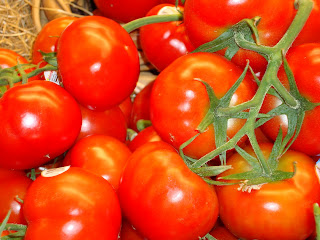 The other day, I needed to set up a pizza photo shoot, so I announced that I was going to the store to pick up some fresh items like tomatoes, a basil plant, and some garlic. Dan, our online media guy, suggested that I take some pictures since the produce displays might be good for a rich backdrop.
I thought that was a pretty good idea, so I grabbed my pocket-sized Canon and headed for the grocery store. The door opened into the produce section, and right there in front of me was a huge display of vine-ripened tomatoes. The color, shapes, and texture all were very appealing. So, I whipped out my camera, started to focus, and then realized that there were these annoying stickers on practically every darn tomato. I scanned the pile for a shot where there were the least stickers, and “click” took my first photo. Not thinking, I forgot to turn off the flash, which with the overly-lit store gave my photo a greenish-gray tint not unlike the way a dog is thought to perceive color. I quickly switched to manual mode, and just as I snapped the second picture, a manager appeared next to me. You would have thought that I was trying to smoke in an airplane bathroom from the way he swooped down on me. At first, I thought he was going to try to confiscate my camera. Mind you, this is a store where you never see a manager (even when I rounded a corner one day and slipped in a split open container of yogurt on the floor and went flying.) He very calmly informed me that I was violating store policy, and when I pleaded ignorance, he said that a notice was posted in the lobby. Guess I wasn’t looking for that one. Although he did his best to be polite and avoid a scene, I felt like a criminal and was terribly paranoid that I was being watched as I went through the store picking out the items I needed.
I guess what I found kind of strange about the incident was why a store would have a policy like that. Did they think I was a terrorist casing out a place to plant a bomb? Or perhaps working for a competitor and trying to unlock the secret of how to create a tower of tomatoes? Or was I some kind of investigative journalist looking for evidence of mislabeled country of origin or (horrors) a wilted tomato vine? Just last summer, NOFA (Northeast Organic Farming Association of Vermont) invited customers to photograph produce at Vermont Farmer’s markets and make a video. They even had the videos posted on youtube for the whole world to see. So, on the one hand, we had food producers/sellers who were proud of their produce, and on the other, a grocery store whose policy it was to prevent photographs. What gives there? And why do I still think that manager perks up behind his two-way mirror every time I walk in the door and watches to see that I’m shopping for produce, not images?
And besides all that, I still have the photo, and here it is for the world to see. If I could only get rid of those unsightly stickers!
Posted by TLC at 9:25 PM

This happened to me in Olympia, WA. Same as you, on the second shot. The only thing I can think of is that they do not want the images of their store used for commercial gain but I still haven't found the real answer and the manager couldn't seem to give me a hint when I asked.