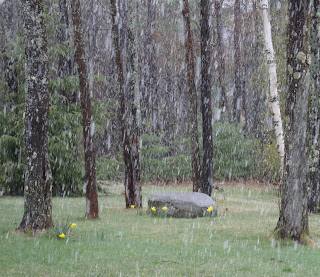 (yep, that's snow)
It is Gluten Free Fair/Celiac Walk season, and no matter where you live, there are many big, successful events to attend. In some part of the country, there is one to attend almost every weekend between now and the end of June. For us as manufacturers, it is always a pleasure to visit with those loyal customers who buy our bread, at the same time meeting new faces and newly-diagnosed celiacs who will become customers.

Yesterday, we divided forces. Tom was at the Gluten Free Cooking Expo in Lisle, IL, and I went to Healthy Villi’s GF Fair in Wellesley Hills, MA. Boy, the Boston Marathoners are in for a real treat today—the spring greenery and flowers were stunning.

At the risk of sounding like Barack Obama, I’d like to mention two typical celiacs I met. The first was Penny from NH, who has been eating gluten free for 10 years, and buying our bread since we started the business. She said she was just turning 70, but clearly a gluten free diet agrees with her—she looked at least 10 years younger! Before we had finished chatting, I had seen pictures of her adorable kilt-clad grandsons who live in Scotland and had learned that her daughter by chance had to come up with a snack to feed an unexpected visitor-- Prince Charles (she gave him strawberries and crème fraiche.) Can’t wait to tell this story to my college-aged son. We’ve always stressed the importance of table manners, and he’s always answered, “Yes, I know, in case I ever have dinner with the Queen.” Well, here was someone who had to dig in her pantry to feed a hungry would-be King. You just never know.

And then there was Everett, a totally charming gentleman, who was a fan of our bagels. He was diagnosed almost 21 years ago, when there was very little knowledge and even less gluten free options. Going on 89, he still drives—told me he’s driven over a million miles, 220,000 of them pulling an Airstream camper, and has log books to prove it. He listed off all the family members and former wives he’s outlived, and it was more than the number of daffodils that are blooming so far in my Vermont yard! Everett left me with typed copies of a few of his recipes. One is for a grits-based breakfast mixture, which I’m sure Tom (the hot cereal fanatic in our household) will love.

Going on the road is not easy, but the joys of connecting with the people whose lives our bread has changed, makes it worth it. Next stop, Detroit.
Posted by TLC at 11:13 AM